Thermography measures the infrared radiation (heat) which emits from the surface of the body. Areas of abnormality, pathology or disease within the body will be observed as either hot or cold depending on the metabolic activity. An ultra-sensitive thermal camera and a sophisticated computer are used to convert the infrared heat emitting from the surface of the skin into electrical impulses that are visualized in color, known as a thermogram. 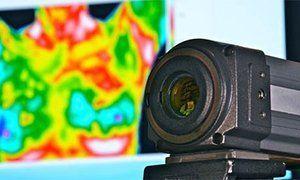 The thermogram is then interpreted by a team of medical doctors known as thermologists who provide a detailed report of the findings. The technology of thermography has been utilized for decades and can detect physiological changes at an early stage.

Although thermography is best known for imaging and assessing breast health, it has a wide range of other applications due to its ability to view inflammation. Inflammation is a precursor to many diseases such as heart disease, diabetes, arthritis, and cancer. Whether looking at the lymphatic or cardiovascular systems or looking at specific areas of concern like the oral cavity or breasts, a thermogram views these as one system, the whole body. The thermographic images seen here depict oral inflammation and the connection to the lymphatic system.

A thermography screening assesses the health of the thyroid, oral cavity, breasts, abdomen, and lower body as well as any other specific areas that may be of concern. Thermography is non-invasive and radiation free, which makes it a great option for routine health screenings.

Traditional medical screenings such as X-rays, mammograms, ultrasounds, and MRIs focus on disease management, whereas thermography focuses on locating problem areas before they turn into disease.

The first image is of a patient that was diagnosed with a hormonal imbalance following her thermography screening. The second image is of the same patient at her comparison screening just six months later. The patient worked closely with a naturopathic physician on lifestyle changes such as diet and supplementation, which significantly improved her screening and ultimately her health.

The body in a normal healthy state has a high degree of thermal symmetry (even on both sides). An individual’s thermal fingerprint should stay stable over a lifetime, it is only when pathology of some type develops where asymmetrical patterns emerge. When used as a screening tool, thermography can allow the visualization of the most subtle temperature differences. It is the asymmetry seen on a thermogram that assists in identifying suspicious areas and aids in the earlier detection of disease. A baseline will be established when comparing the initial thermography screening to all future screenings. It is of the utmost importance that all the recommendations listed in the thermography report are followed closely especially when to return for comparison screenings.

Office Hours
Get in touch