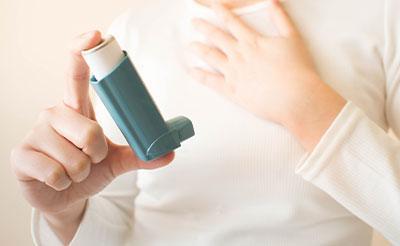 The U.S. Centers for Disease Control (CDC) reported that in 2011 over 7 million children had asthma.  This is chronic (long-term) inflammation and obstruction of the airways of the lungs (bronchoconstriction), making it more difficult to breathe, with tightening in the chest, wheezing, coughing, or shortness of breath.  Asthmatic children are more sensitive to allergens and irritants, which cause the immune system to overreact, resulting in inflammation and, eventually, a thickening of the lining of the airways.

Avoiding the allergens or irritants that trigger an asthmatic attack is the first rule for all asthmatics.  This usually is not a 100% effective “treatment” program.  Medications are used to treat only the symptoms.

Wheezing and coughing usually are treated with inhaled short-acting beta-2 agonists such as salbutamol (which may produce such side effects as tremor, anxiety, headache, muscle cramps, dry mouth, and palpitation, or, less commonly, tachycardia, arrhythmia, or flushing).

Bronchodilators increase airflow to the lungs by widening air passages. Tachycardia and other arrhythmias such as an irregular heartbeat and palpitations are reported as occasional side effects.

Inhaled corticosteroids, and the older and less effective leukotriene antagonists, may be prescribed to suppress the inflammation.  Corticosteroids have a long list of reported side effects, including steroid psychosis, anxiety, and depression.

Treatment of Childhood Asthma with Acupuncture

In 1979 the World Health Organization stated that acupuncture is excellent for a mild attack of asthma and is well accepted by children.

More recent studies and case histories of acupuncture treatment for childhood asthma have been reported out of China:

Dr. Chen Anmin at the Henan Provincial Hospital of Traditional Chinese Medicine reported that acupuncture and moxibustion during acute attacks can relieve asthma instantaneously, and future attacks are reduced.

Lou Baiceng at the Zhejiang Institute of Traditional Chinese Medicine finds that acupuncture is an effective treatment for asthma, especially for children.

Researchers at Nanjing University of Traditional Chinese Medicine found that acupuncture measurably improves the self-regulation (neuro-regulation) of the air passages through desirable sympathetic nerve excitement of the smooth muscle of the bronchial tubes, as well as regulation via the neuroendocrine center of the hypothalamus.

A growing number of children in the United States are being treated with acupuncture and other CAM (Complementary and Alternative Medicine) therapies.  The 2007 U.S. National Health Interview Survey found that the most common conditions treated are stress, skin conditions, anxiety, and asthma.

When an asthma attack hits a child, it can be a difficult choice to risk the potentially dangerous side effects of medications.  A safe and often effective alternative, acupuncture, is increasingly available throughout the United States.

Drugs are the “heavy artillery” still available should the situation warrant it.

Office Hours
Get in touch